What happens when you flip the history of the kill-switch? “This is the way the world ends/Not with a bang but a click.” Gentrification’s path might be lit by the Edison bulb, but it’s best enabled by privacy’s core sociological dichotomy—complicity with the state furthered by bourgeois virtue to enforce proprietary holdings (lands, pharmaceuticals, pithy taglines), on the one hand, and last-battered defense against a cookie-monetized future of pseudo-philanthropic Ted Talks and the NSA’s YouTube channel, on the other.

Capitulated through the use of infrastructures and platforms, rather than the realization of embodiments, and often produced in the below-the-fold, console-based web and other “encrypted” networks, these immaterial performances of media and economy prompt questions about the labor involved in signaling, in general—and virtue signaling, in particular. What does it mean to “perform” choice in the information economy, i.e., the gig economy, i.e., the post-post-capitalist economy, i.e., the necrotic-Boomers-destroyed-it economy, on “the internet,” especially if we take the internet to mean, “anything you do, at any given moment of the day, that might be touched by finance capital?” Psychosomatic Netflix binges, off-notification sexting on Signal, ranking Grubhub delivery options by how likely or not it is you will engage with another human, clicking “Report” on the sponsored content behind a cyborg-influencer’s Instagram post about detox tummy tone wraps—all are such immaterial allusions as dreams are made of, and our little life is rounded with a sleep (or, at least, Suspend to RAM mode).

Even academics have started to surmise that production and reproduction are interwoven enough such that it may no longer be possible to speak of “precarious labor”—a term popularized during the French fast-food worker strikes of the early aughts—without enveloping its synonym, precarious life. Remote Control, a game show, aired on MTV from 1987 to 1990; the set was a living-at-home, middle-aged slacker’s basement trussed up as a television studio, mediating the confluence of then-emergent cable television, economic instability, and technologically conducive categories of the meta-, converged around a burgeoning youth market ready to consume “cutting-edge” electronic merchandise advertised as prizes on the show and manufactured by its commercial sponsors. The trivia categories were called “Channels”; only the contestants could change them. 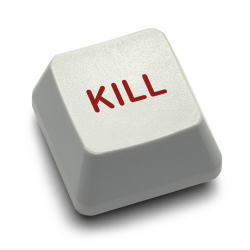 Discord is a proprietary freeware VoIP application; Discord Channel is an e-chat platform built into gaming sites, popular with the alt-right, no doubt in part because its marketing points include “anonymity” and “privacy.” Here a user can’t change the read-only channel, in the satellite television push-button control sense, but can instead invite other users into sub-channels that allow perverse performances of self and other under the cloak of confidential severs and permissions systems. Who would you choose to be if you know you could disappear in five hours? What kind of system would you build—geopolitical, carceral, economic, or otherwise—if you knew its processes could become immediately and temporarily disabled to protect “private” data, rendering its infrastructures briefly unusable and its mechanisms momentarily illegible to critique? What kind of labor—or better: which type of laborer—triggers the kill-switch to call-off the drones, delete the misogynistic screed, turn on the anti-piracy alarm, or disintegrate the paper trail? Everything is a rehearsal until it’s time to break a leg; every choice is immaterial until the outcome’s prohibitive. If time is labor, then privacy is a tongue-tied bootlicker stomping on a sundial. After all, the progress bar, which we take as a measure of temporality in our currently streaming reality, was invented before the computer: as the Harmonogram, an “overlooked method of scheduling work.”