For a party at an artist-run space last Halloween, I went as “The Slow Cancellation of the Future,” the first chapter from deceased anti-capitalist theorist Mark Fisher’s book Ghosts of My Life: Writings on Depression, Hauntology, and Lost Futures (2014). In choosing the title, Fisher was signaling to—or more bluntly, borrowing a concept from—Italian autonomist critic Franco “Bifo” Berardi’s After the Future (2011), leaning in to the impotent timekeeping of our era, in which a combination of financial aggression, technological displacement, and retrospective culture traps us in a present that has long since replaced the idiomatic expression, “Tomorrow is a new day!,” with something, like, “Eventuality is the junkyard dog of yesterday!,” or better: a “Past to the Future” sale at a Party City franchise located someplace just beyond the strip mall of the real. 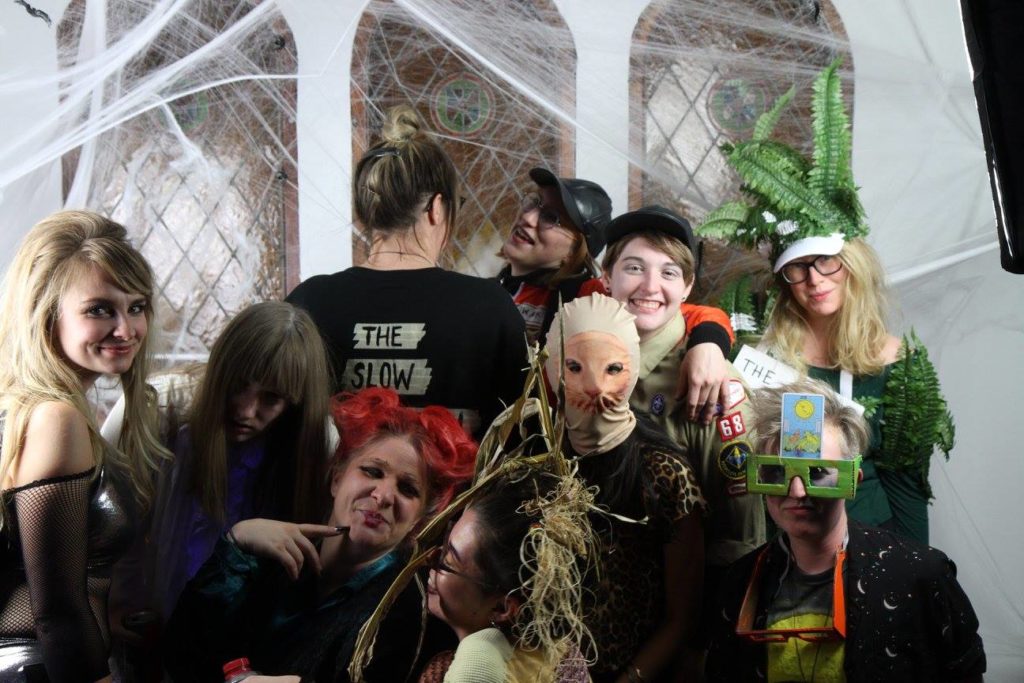 “Kill All Boomers,” the bumper sticker read. Most of us who tread the path of aesthetic resistance in the face of certain fiscal and temporal inheritances know enough to at least insist that it is through agonistic engagement outside, with, and beyond new institutions that we will come to know enough to hate the bank (or the bankers)—but maybe not sufficiently plenty to hate the Future (or the Futurists).1 This, despite the fact that both institutions—speculative finance and conjectural futurity—draw their shared power from quotidian desires that shape our experience of the present. Finance capital wants to infinitely, if virtually, reproduce itself so the free market can live forever; we yearn for something called “the future,” so that we might one day die. We need to insist on the validity of political strategies for art and artistic strategies for politics, while acknowledging they remain constrained by how—and what—we allow our words to perform, or else, to borrow from the thinking of Chantal Mouffe, we merely substitute cultural production for capital valorization.2

Chrematistic is an ancient Greek expression that often implies the study of wealth, or at least wealth as measured in money. Perhaps coincidentally, the lone instance in which the word “overlap” (überlappen) appears in Volume One of Capital occurs when Marx cites Aristotle’s mention of the term in his Politics, via a passage on the discrepancy between the Chrematistic and Economic orders that would later prove crucial to Marx’s situating of the labor theory of value, not insignificantly influenced by Aristotle’s understanding of exchange:

The Economic, not Chrematistic [order] has a limit. . . . The object of the former is something different from money, of the latter the augmentation of money. . . . By confounding these two forms, which overlap each other, some people have been led to look upon the preservation and increase of money ad infinitum as the end and aim of the Economic.4 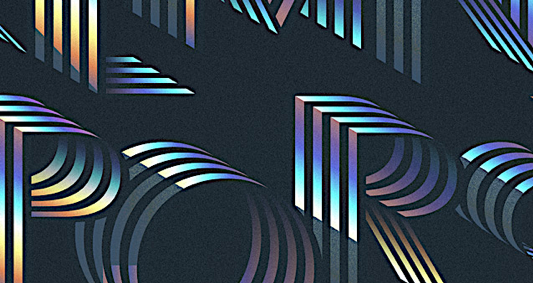 Figure 2: "This is a beautiful vintage computer style text effect with a vector collection of letters to let you create your own styled text effect."

The “Mega-Sonic Retro Text Effect,” a font popular on Pinterest, amplifies and then solidifies its presence by overlapping each element to project a nebulous space of extra-dimensionality that never quite fully arrives—much like the future, to do so would require a piecemeal dismantling of reality in order to achieve perceptual hijinks. Consider the etymology of “overlap,” from the Old English (ofer– + læppa) was charged to mean “extend beyond,” as early as the 1630s. Prior to that, “lap” euphemistically referred first to the upper legs or at least the portion of such encumbered by a skirt’s fabric, then later and more explicitly, to female genitalia. The gestures of a libidinal economy, all things considered; film critic Anthony Lane likely put it best in his review of Showgirls: “To lap dance, you undress, sit your client down, order him to stay still and fully clothed, then hover over him, making a motion that you have perfected by watching Mister Softee ice cream dispensers.”5 Neoliberal late capitalism put it even better by including the quote as an aside in a generic online etymology dictionary.6

Ladies and Gentleman, to misquote Stereolab c. 1997, our signs are floating in space. 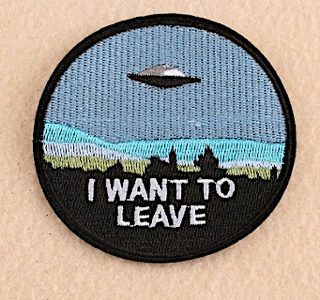 On a recent trip to Chicago’s Museum of Science and Industry, while waiting for a colleague to walk over from the second-least expensive parking lot, I circled through the gift shop. I had never been to the MSI before, premised on one hand upon my own fear that every museum is an ill-conceived diorama to the genealogies of industrial capital, and on another, because I had worked down the street at a marketing job for over a decade, and found myself filled with dread at the thought of lingering in any extra-institutional confines beyond that particular false portico façade. The only thing I felt tempted to purchase at the MSI was a stick-on embroidered patch featuring the word, “SPACE,” administered in that same Mega-Sonic Retro Text Effect—a commodified darning, with slightest psychedelic styling—relayed in all-caps bubble letters, each incarnation of the word overlapping the version prior, as if the displaced signifier were moving impossibly toward you, albeit in a flattened, two-dimensional landscape. “This is nowhere, and it’s forever,” said the showrunner for Star Trek, or Quantum Leap, or Black Mirror, or The Situation Room with Wolf Blitzer, perhaps themselves an artist confronting our macabre fetishization of futurity as a perverse “die-in,” pre-empting our regularly scheduled broadcast of the present.

Julius Rosenwald, the founder and principal financial backer of the MSI, was a former president of Sears, Roebuck & Company and close personal friend of Henry and Paul S. Goldman (of the Goldman-Sachs Goldman’s, who in 1906, handled SR & C’s initial public offering of $40 million in stock options). Rosenwald was also an anti-segregationist and philanthropist, as well as the maternal grandfather of American film producer Armand Deutsch, an inadvertent celebrity per the claim that he was to be the original target—absent only due to a dental appointment—of University of Chicago undergraduates and Nietzsche-inspired thrill-killers, Nathan Leopold, Jr. and Richard Loeb (whose 1924 kidnapping and murder of another classmate, Robert “Bobby” Franks, would inspire Patrick Hamilton’s play Rope [1929]—later adapted into a 1948 film of the same name, directed by Alfred Hitchcock). I’m interested in Rosenwald, who grew up in a house across the street from Abraham Lincoln’s, because of his endowed foundation, the Rosenwald Fund—responsible for $70 million in donations, including funds earmarked toward rural school-building programs for black Americans in the South, museums, universities, a syphilis treatment project, and individual fellowships granted to the likes of WEB Du Bois, Ralph Ellison, Marian Anderson, and Langston Hughes, among others. The Rosenwald Fund was the first of its kind—an endowment with a “sunset clause,” or predetermined end date (in this case, the money ran dry in 1948).7 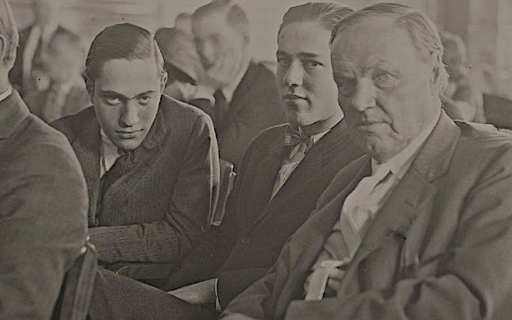 At their well-publicized trial, Leopold and Loeb were eventually sentenced to life in prison plus ninety-nine years. Ninety-nine is the atomic number of Einsteinium, an actinide. Sometimes when I feel certain occurrences are rooted in a casual complexity too dense to explain vis-à-vis watercooler conversation, I often exclaim, “Spooky action at a distance!” I’m no physicist, but I understand this injunction of Albert Einstein against the laws of quantum mechanics to mean something akin to, “entanglements are complicated scenarios in which certain notions are capable of instantaneously influencing certain other notions, without need for physical touch, and regardless of the distance between them” (scare quotes and half-assed assessment my own). Future studies is a bifurcated field: its objects of inquiry both continuity and also that which is subject to change.

As Hitchcock films go, Rope’s novelty rests on the delusion that it was shot in a single take—one long sanctimonious present, in which no future is endlessly deferred—in actuality composed by a series of pans from Hitchcock lasting ten minutes or so each (the length of a film roll in a camera magazine; Hitchcock shot with a then-conventional 35mm lens), often beginning and ending with an object’s interference, as when the camera zooms in on the back of the protangonist’s jacket, which soon covers the entire screen.8 Frequently concealed in the form of a tracking shot or dissolve, these pans ended up masking more than half the cuts in the film. Ironic, the smooth illusion of continuous progress mapped onto and predicated by a desire to shield our gaze from the abrupt transitions of one sequence to another. Trim the excess; quell the buzz; capture the significance—or as Elon Musk once said of Tesla, Inc.: “We could definitely make a flying car—but that’s not the hard part. The hard part is, how do you make a flying car that’s super safe and quiet? Because if it’s a howler, you’re going to make people very unhappy.”9

Speaking of happiness, or not worrying about it, I have no problem admitting I have Googled, more than once, “Is Bobby McFerrin a neoliberal?”